“The Tories think they can do whatever they want to Scotland and get away with it.” – Deidre Brock MP 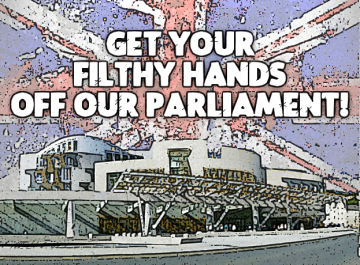 And why wouldn’t they think this? Why wouldn’t the British establishment blithely suppose they can do whatever they want to Scotland and get away with it? After all, this is precisely what we, as a nation, told them in 2014. That’s what a No vote meant. It’s effect was to give the British political elite licence to dispose of Scotland as they wished. To deal with us as they might find expedient.

And, for all Ms Brock’s splendid assurances that “the SNP is determined not to let them”, what has actually been prevented? What measures have been blocked? From EVEL to Brexit and the ‘power-grab’, the British state has proceeded unfettered in its abuse of Scotland’s interests and contempt for our democratic will. All objections have been ignored. All protests have been brushed aside. All demands have been ineffectual.

This is not to doubt that the SNP are Scotland’s champions. Nobody else is carrying our demands and protests and objections into the heart of the British political system. Nobody else is in a position to do so. The SNP is the de facto political arm of Scotland’s independence movement. We rely on them.

There’s no point in blaming the SNP. They may not get everything right, and we can always wish that they would do more. But they cannot do it alone. We must take responsibility. We must play our part. It was we, the people of Scotland, who consented to being treated as we are by the British state. It was we who granted that licence to the British political elite. In 2014, we held in our hands the power to determine our nation’s future. We chose to hand that power to a bunch of corrupt and incompetent politicians in London. We did that! It’s up to us to put it right. It’s up to us to rectify our mistake.

If the SNP lacks the power to be more effective in championing Scotland’s interests it’s because we haven’t provided them with that power. It can only come from us. All political power and democratic authority ultimately derives from the people. If we expect the SNP to take a stand against the forces of ‘One Nation’ British Nationalism then we must stand with them.

This is our fight. The SNP is our weapon. Let’s use it!