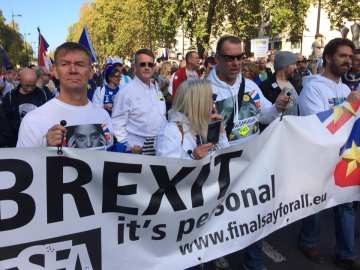 There may be sound reasons for opposing a #PeoplesVote. But concerns about a “confirmatory referendum” following a Yes vote should not be one of them. In the first place, we must wonder how likely it is that, having just restored Scotland’s independence, the Scottish people would then change their minds and hand power back to the British political elite.

It is argued that the British government could make the ‘divorce settlement’ so unpalatable as to cause voters to reconsider their choice. But this assumes that the British state has the stronger hand in negotiations such as would allow it to impose a settlement. Even if this were the case, bullying tactics of this sort would surely be as likely stiffen the resolve of voters as to deter them.

And it is wrong to suppose that Scotland would be negotiating from a position of weakness. Simple logic tells us that the British state’s determination to hold on to Scotland implies we have things that they want. They’d still want – perhaps need – those things after independence and this would give Scotland something to bargain with.

Also, any ‘divorce settlement’ which was bad for Scotland would probably be harmful to the rest of the UK (rUK). This at a time when rUK is likely to be particularly vulnerable to political and economic turbulence.

We should not fear a confirmatory referendum. Even if Westminster could demand one – and chose to do so – I am confident it would only reinforce the original Yes vote.

But there is another reason why concern about a referendum to confirm a Yes vote cannot be an adequate justification for opposing a #PeoplesVote. There would have to be a second referendum anyway!

After a Yes vote, one of the first tasks for the Scottish Government will be the drafting of a written constitution. This constitution will have to be endorsed by the people of Scotland in a referendum. It should be easy to argue that this makes a confirmatory referendum redundant.

None of which is to say that I entirely agree with the SNP administration’s decision to support a #PeoplesVote. Or that I wholly approve of the manner in which this decision was taken. There should have been wider discussion of the matter within the party. Had such discussions taken place, I would have been arguing for a position of ‘active indifference’. Not supporting a #PeoplesVote – because Scotland has already voted and our voice has been ignored. Not opposing – because it would be good if rUK changed its mind and brought the whole Brexit fiasco to a halt. And because opposing a democratic vote is never a good look.

I would have advised using the issue of a #PeoplesVote as a device by which to emphasise the fact that Brexit is very much ‘England’s problem’. And to drive home the point that we have the means to ensure that it isn’t made Scotland’s problem.