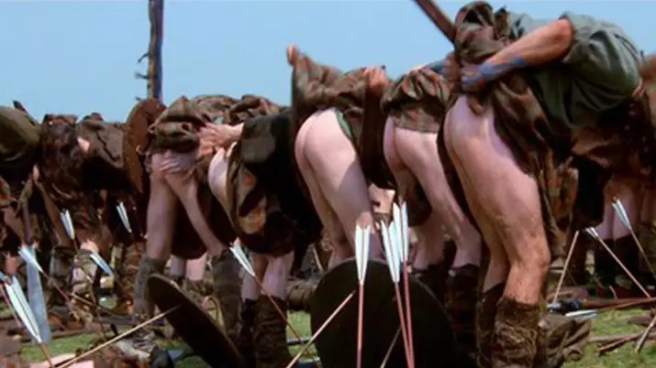 I’ve probably watched Braveheart three or four times. I could watch Mel Gibson’s 1995 ‘arse and archery’ epic again today and still enjoy it. It’s that kind of movie. A fine piece of cinematic story-telling replete with powerful characters and rich in visual spectacle. It’s a bit of fun. But is it more than that? Is Braveheart culturally or politically important?

The film has always been controversial. There have always been those prepared to embarrass themselves by criticising Braveheart as if it was intended to be a historical documentary. Denouncing Braveheart for its lack of academic rigour is a bit like condemning the Frankenstein movies for their failure to accurately represent the intricacies of transplant surgery. There’s missing the point; and there’s taking an intergalactic detour around it.

Then there are those who choose to regard Braveheart as some kind of totem for Scotland’s independence movement. From my observations, these are mostly Unionists. A large part of my personal enthusiasm for the film derives from the fact that it is such an irritant to British Nationalists. I know of no actual research on the matter, but I’d venture a small wager that a suitable study would show Braveheart to be all but exclusively an obsession of those most vehemently opposed to the restoration of Scotland’s independence. Even political commentators who are supposedly worthy of respect quite commonly use the word ‘Braveheart’ as a woefully simplistic shorthand for what they imagine to be the motivation behind Scotland’s independence cause.

There are even those who insist that the whole independence campaign was provoked by Braveheart. It is not at all uncommon to find people insisting that, prior to Braveheart, your average ‘Sweaty’ was content with his or her lot, and would have remained so if they had not been roused to revolt against the natural order by the heavy symbolism of defiantly bared proletarian bums. If Che Guevara had been Scottish those iconic posters and T-shirts might have looked very different.

Disobligingly declining to conform to such facile British Nationalist stereotypes, I never regarded Braveheart as having any great political significance. While being glad of anything that might challenge – however inadequately – the stolidly British history traditionally taught to Scotland’s children, I never thought of Braveheart as relating to the modern civic nationalist movement in any meaningful way. But recent events have prompted me to revisit my attitude to something I had previously perceived to be no more than a bit of mass-appeal Hollywood hokum.

Call me contrary! But when something arouses the self-righteous ire of Mike Small and triggers the tut-tutting reflex of cultural gate-keepers such as Pat Kane, I am temperamentally inclined to look upon that something with a degree of favour inversely proportional to their elitist disapprobation. Admittedly, it doesn’t take much to set off Gerry Hassan’s supercilious sneering. But my first instinct is to sympathise with the target of his scornful disdain.

So it was that I began to consider whether I may have been wrong to dismiss Braveheart as mere superficial entertainment. I started to wonder if the movie might have acquired some special significance in the context of a Yes movement which, at the time the film was made, was not only non-existent but utterly unimaginable.

Say what you like about Braveheart, at a time when we were taught next to nothing about Scottish history in our own schools it put the common people of Scotland’s past right at the very heart of our national story. The veterans on the field were given lines, we saw the pain and intimacy of the couple’s wedding disrupted by the English Lord, the love of Elder Stewart for Hamish his son, and the affable if utterly mad Irishman Stephen. It was their Scotland we were rooting for because that was our Scotland. It’s hard to know the rats when the poll tax isn’t taking food from your table, or expect clean toilets when dad has upped and left and mum is drunk. You can sneer at Braveheart only when you’ve never felt that independence might be your only chance.

Besides all this, Braveheart is only a film. It was never intended to be a documentary, it is truth without being fact – a story. And like every good story it lifted those who needed lifting and has no doubt done more for the cause of independence in Scotland than this blog, Bella Caledonia, CommonSpace, and all the rest combined. Those who love to sneer at it may want independence, but what Braveheart did – by accident or by design – was to embolden the hearts of those of us who really need independence. So, to the sneerers – Shut up! And to the rest – Sit down and enjoy the show!

I am rather doubtful about the extent to which anybody actually saw the film this way back in 1995. At least, not consciously. I certainly cannot claim to have analysed Braveheart as an allegory of class struggle. But the analysis has a certain resonance. It seems perfectly possible that the movie may have had a subliminal appeal much as Jason describes. If that analysis is valid, then it must have implications for the present-day symbolic relevance of the film and the ways in which that symbolism is deployed.

Mike Small disapproves of the decision to screen a heavily edited version of Braveheart as a ‘warm-up’ for the Hope Over Fear Rally in Freedom Square on Saturday (15 September). But my very strong suspicion is that what troubles him most is that nobody sought his approval. Scotland’s ‘radical’ elite simply don’t like the fact that the Yes movement is not under their control. They resent the fact that they have so little influence. They are frustrated by the fact that they have been unable to harness the Yes movement to their various agendas.

Showing Braveheart at the Hope Over Fear Rally is an act of (metaphorically) bare-arsed defiance, not only against the British establishment and its lackeys in Scotland, but against the mainly left-wing cliques who would claim ownership of the Yes movement, and so destroy it. By reclaiming Braveheart as a symbol of popular democratic dissent, we reassert the status of the Yes movement as a genuine grassroots democratic phenomenon – diverse, inclusive, unstructured and joyfully rebellious.

The Tusker thunders against injustice and dirty big fibs in Scotland's Nomedia! talkingupreminders@gmail.com