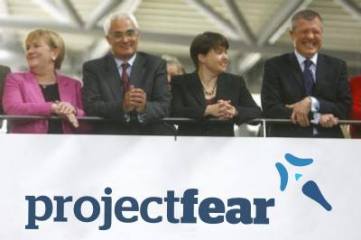 Having been surprised, and not a little irked, to discover that a total lack of gender-balance on a panel had suddenly become something to brag about, I was tempted to give up on Carolyn Leckie’s article as just another condescending lecture from the happy-clappy faction of the Yes movement urging tip-toe eggshell-treading in the vicinity of No voters when I encountered the claim that “people have valid reasons and feelings for voting No”. Supposing we were about to be presented with some of these “valid reasons”, I thought it might be worth wading through the cloying self-righteousness of Ms Leckie’s sermonising in the hope of finally getting some clues as to that most mysterious of beasts, the ‘positive case for the Union’.

It was a forlorn hope. Having hinted at a revelation, Ms Leckie left us hanging. The ‘positive case for the Union’ remains as elusive as Ruth Davidson when the subject of ‘dark money’ is raised and as impenetrably baffling as a Richard Leonard speech.

Instead of the rational justifications for voting to give the British political elite licence to dispose of Scotland as it pleases that we’d been teased with, what we got was the facile argument that the constitution is subordinate to “bread-and-butter concerns” and an inane admission that “not everything in the garden will miraculously turn rosy after independence”. As if anybody had ever claimed that it would. And as if the ability to address those “bread-and-butter concerns” wasn’t absolutely dependent on the core constitutional issue of sovereignty.

All of which is unfortunate. Because I would have been delighted to discover how No voters continue to justify that choice. From where I stand, what distinguishes No voters from Yes voters is that the former unthinkingly accepted the lies, smears, insults and threats of Project Fear while the latter saw right through them. Some of them believed the Better Together propaganda for no better reason than that it was British. For those whose first and abiding loyalty is to the British state and its ruling elites, no reflection was required. Voting No was as innate as the gag reflex.

Others, we are assured, voted No having given the matter some thought. I had hoped that Ms Leckie was going to throw some light on how these people came to the conclusion that keeping Scotland bound to the British state was the best option. I genuinely want to understand the reasoning process involved. I would really like to be assured that there was one.

I really want to know what it was about the anti-independence case that No voters found intellectually persuasive. I would be fascinated to hear their reasons for continuing to be convinced by that case even after it has been conclusively shown to have been utterly dishonest. I need to understand the mentality that can insist a No vote was ‘right’ when they know that it was sold to them on a totally false prospectus.

It is a truism that the first step on the road to recovery is to acknowledge the problem. If people are to change, they must take responsibility for past choices and actions. But the essence of Carolyn Leckie’s remonstrance is that we in the Yes movement must never ask No voters to take responsibility for their choice. We are supposed to persuade them to make a different choice whilst assuring them that we don’t consider their previous choice to have been in any sense wrong.

Following a comment that is offensively dismissive of the work put in by those who pound the streets delivering leaflets and the Herculean effort of those who organise marches, Ms Leckie ends by telling us that “to achieve success, we have to confront the hard stuff too” – as if leafleting and organising marches wasn’t “hard stuff”. But she herself is not prepared to take on the hard task of confronting No voters with the hard truth that their reasons for voting No were not valid. She insists that we must never ask No voters to confront the consequences of their choice.

The real “hard stuff” of the coming campaign involves forcefully impressing on people the harsh reality of what the Union means for Scotland, and what it will mean in the very immediate future if we do not act as a matter of urgency. We cannot possibly do this without categorically rejecting any suggestion that there can possibly be “valid reasons” for favouring a political union which precludes adequate representation of Scotland’s interests and prohibits the proper exercise of popular sovereignty.

No voters are not misguided children who need to be shielded from the implications of their actions. They must be afforded the respect due to mature individuals capable of acknowledging past mistakes and accepting that they were maliciously misled. That is the starting point for the journey from No to Yes.

3 thoughts on “Proper respect for No voters”