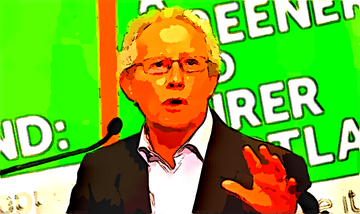 The key phrase in what Henry McLeish says is “the Westminster government has paraded its constitutional authority”. This is precisely what has happened, and is happening. The British political elite is asserting ultimate constitutional authority in the hope and expectation that it will not be challenged. The constitutional rights of the devolved parliaments are being steam-rollered by the loudly and constantly proclaimed supremacy of the British state, along with the democratic and, quite possibly, the human rights of the people of these islands.

Henry McLeish is to be applauded for what is without doubt his most insightful and valuable intervention to date. We might wish only that he had been more forthright and forceful in his calls for a challenge to this asserted constitutional authority.

It is a call which echoes what is being urged by increasing numbers of people in the Yes movement. Especially by those who have always been wary of the unfortunate tendency to hitch the independence cause to the Brexit process rather than dealing with it as a matter of fundamental constitutional justice.

While Henry McLeish takes a studiously legalistic approach, others – myself included – see the issue more in terms of a generalised mindset. I contend that we must rid ourselves of the mindset which has us acting only within the frame of established power. We must reframe our actions in terms of our own power. We must do, rather than be done to. We must act, rather than be acted upon.

The people of Scotland have the absolute and inalienable right to choose the form of government which best serves their needs, priorities and aspirations.

Only the people of Scotland have the rightful authority to determine and constrain the powers of the Scottish Parliament.

The Scottish Parliament speaks for the people of Scotland. When that Parliament decides that the existing political union with England must end, the Scottish Government must act on that decision. It must act to dissolve the Union, subject only to this being ratified by plebiscite.

That’s it! No mention of Westminster or courts. Why would there be. What is described above is, in outline at least, the necessary and sufficient process by which constitutional reform is effected in Scotland. Anything else is external interference. Which is explicitly prohibited by the Charter of the United Nations.

It is all and entirely about us. We decide! We, the people, decide! That is the beginning and the end of all democratic politics. The people are the sole source of legitimate political authority. The constitutional authority paraded by Westminster is without substance. It is a spectre conjured by the apparatus of established power. It is a phantom which evaporates upon being confronted.