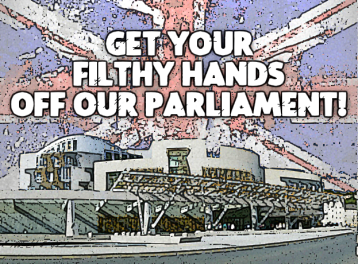 News that the Home Office will no longer speak to MSPs about their constituents on immigration matters comes little more than a week after we learned that MSPs are being obstructed from helping constituents with problems claiming benefits. New procedures instituted by the Department for Work & Pensions (DWP) mean that MSPs may no longer contact Job Centre staff directly in an effort to resolve constituents’ problems. Regardless of how urgent the situation, they are now required to submit an enquiry by email and await a written response. Now it has been revealed that the Home Office is refusing to engage with MSPs wishing to discuss immigration issues affecting individuals and families in their constituencies.

In both cases, these new arrangements apply only to MSPs. MPs will not be similarly impeded in their efforts to help members of the public. It is difficult not to see a pattern emerging here. Especially when these recent developments are placed alongside other evidence of the British establishment’s increasing antipathy towards the Scottish Parliament. Take, for example, Ruth Davidson’s endlessly repeated insistence that there is ‘no demand. for a new independence referendum in brazen contempt of a decision taken by the Scottish Parliament.

Or the UK Government’s wilful failure to engage with the Scottish Government over the Brexit process.

Or the high-handed, imperious manner in which the UK government swept away the fundamental principle that powers not specifically reserved to Westminster are devolved.

This goes beyond mere ignorance of or disdain for the devolution settlement. What we are seeing is a purposeful and concerted effort to undermine and delegitimise the Scottish Parliament.

This is not new. Devolved powers over income tax and welfare are little more than a clumsily contrived collection of fiscal and political traps and pitfalls that have only been substantially avoided thanks partly to the artlessness of their construction but mainly to the skill and determination of people such as John Swinney, Derek Mackay and Jeane Freeman. Devolution was never more than a device by which to placate democratic dissent whilst continuing to withhold powers from the Scottish Parliament. Latterly, it was transformed into a political weapon deployed against the SNP, the Scottish Government and now the Scottish Parliament itself.

What is different now is that all pretence has been dropped. The attacks on Scotland’s democratic institutions have become as open and unsubtle as the attacks on Scotland’s public services. The effort to diminish and denigrate the Scottish Parliament is being ratcheted up at the same time as the British state’s presence in Scotland is being enhanced and promoted. There is nether accident nor coincidence in the fact that MSPs are being hampered in the performance of their duties whilst the British state pours resources into building up the ‘UK Government in Scotland’. It is not mere happenstance that the British media is redoubling its efforts to raise the profile of British Nationalist politicians like Ruth Davidson whilst shielding them from proper scrutiny.

2 thoughts on “Spot the coup!”