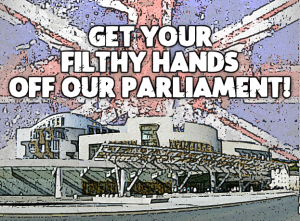 There is a tone of bemused incomprehension in David Mundell’s remarks concerning the Scottish Government’s position in the current wrangle over powers. He simply cannot understand why the Scottish Government refuses to bend to the will of the British state. The concept of a fundamental principle is totally lost on him. Accustomed to a political culture in which supposedly cherished precepts are reduced to mere trade goods, Mundell is obviously deeply perplexed by the SNP administration’s disinclination to do business.

Mundell clearly supposes that a vote of the Scottish Parliament might be bought with a meaningless ‘concession’. As a mark of the British political elite’s contempt for Scotland, this would be bad enough. But the assumption that the Scottish Government might be had so cheaply may signal something arguably far worse than mere disdain for Scotland and its people.

Most of us, it is safe to assume, recoil in disgust from the uber-patriotic ideology encapsulated in the expression, ‘My country! Right or wrong!’. How much more repugnant is this kind of mindless exceptionalism when it relates, not to a country, but to a particular ruling elite and the political system by which it maintains its status. A certain commitment to the land one calls ones own may be normal, even admirable. But unthinking devotion to a select group and dogmatic belief in this group’s righteousness is the very essence of extremism.

David Mundell is genuinely shocked that anyone should challenge the authority of the British political elite with which he identifies. He is sincerely baffled by the SNP’s refusal to accept the supremacy of Westminster and their insistence that the will of the Scottish Parliament must be respected. He must know, at some level, that the ‘concession’ being offered by the British government is as worthless as the tawdry beads and shiny baubles with which European imperialist colonisers sought to purchase the servitude of indigenous peoples. But Scotland is supposed to be grateful for whatever it receives. We have no right to anything. Whatever the British state may offer is to be accepted with humility. The value of the ‘concession’ lies, not in its effect, but in the fact that it is being proffered at all by our superiors.

The SNP isn’t playing the British political game of token opposition readily bought-off with some trinket. They were supposed to follow the example of British Labour in Wales and meekly accept Westminster’s authority to seize devolved powers in return for a totally unconvincing assurance that this would be temporary.

The dispute between Westminster and Holyrood is not mere haggling over powers. It is a truly momentous clash of political cultures. On one hand we have the openly anti-democratic ‘One Nation’ British Nationalism so ably represented by David Mundell. On the other, we have a political culture based on fundamental democratic principles such as popular sovereignty and the right of self-determination being defended by the SNP. The latter is alien and incomprehensible to the former.

Depending on who prevails, Scotland’s democracy will either survive and prosper, or be crushed out of existence. Mundell and his fellow British Nationalists may be incapable of appreciating the Scottish Government’s stance, but they certainly recognise the threat posed to the established order by the wave of democratic dissent rising in Scotland.