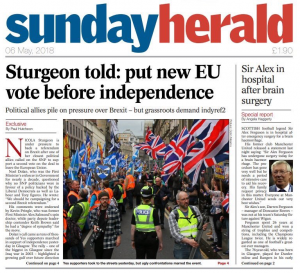 The Sunday Herald editor’s attempt to deflect and defuse scathing criticism of his paper’s coverage of the All Under One Banner (AUOB) march in Glasgow last Saturday (5 May) brought to mind the BBC’s established practice of dealing with complaints by the simple expedient of declaring itself innocent – having first appointed itself the ultimate arbiter in all such matters. Mackay goes one better, however, by pronouncing himself and his newspaper, not only guiltless, but impeccable – a splendiferous flowering of all that is purest and brightest in the realm of print media. If his piece had run to another hundred words we might have been obliged to add self-beatification to that list.

we wish to provide balance, accuracy and fairness. Our coverage last Sunday was an attempt to maintain that tradition.

the Sunday Herald has long tried to provide balance

the Sunday Herald office is staffed with some of the most experienced and talented reporting staff in journalism.

the Sunday Herald prides itself on the accuracy of its journalism and photo-journalism.

Was Neil Mackay explaining editorial decisions? Or was he writing his own testimonial?

And what about those editorial decisions? Mackay doesn’t quite manage an apology for the picture which adorned the front page of last Sunday’s edition. Or for the caption which accompanied it. The picture was widely condemned for giving the impression of a British Nationalist counter-demonstration which was (at least?) equal in size to the march. Or, as he puts it in an early instance of his self-serving narrative,

the picture was not representative of the day’s event

But “the most experienced and talented reporting staff in journalism” were totally blind to the problem with that image. They were unaware. They just didn’t see it. That’s the issue here, Neil! That’s the problem. As the editor, it’s your problem. And you are evidently as oblivious to that problem as you were to the unacceptable nature of the image. It’s about the mindset. It’s about the ethos. If your newspaper was even half as good as you imagine it to be, somebody would have caught that picture before it went to print. But nobody saw it. Or, worse still, somebody may have spotted the problem but felt unable to speak up. What does that say about your “impeccable credentials”, Neil?

Then there’s the caption below the offending image. The caption which compounded the pejorative nature of the picture by claiming that “ugly confrontations marred the event”. The term ‘confrontations’ implies two or more parties. It is reminiscent of British media reports which described the British Nationalist rioting in George Square on the day after the 2014 referendum as “clashes”, suggesting that Yes supporters participated in the violence rather than being the targets of it.

The caption is at least as misleading as the picture. Again, it begs the question as to why “the most experienced and talented reporting staff in journalism” so readily resort to material which does anything but “provide balance, accuracy and fairness”.

It’s a conundrum that Neil Mackay urgently needs to address. If he and his staff are to be credited with the principled professionalism to which he lays claim, than how can this misrepresentation and distortion be anything other than deliberate? How might we simultaneously accept that they are exceptionally good at their jobs and that they make repeated blunders such as have been described? How does Neil Mackay reconcile this grating contradiction?

While he’s about it, perhaps he might try to explain how his claim of “balance, accuracy and fairness” can be compatible with holding the SNP leadership responsible for every word uttered by anybody who so much as hints at even the most tenuous association with the independence campaign, while the likes of Ruth Davidson and Richard Leonard are not similarly held to be accountable for the behaviour of British Nationalist bigots spewing bile on social media and confronting peaceful marchers on the streets with abuse and Nazi salutes.

Warning! The prejudice oozing out of the following paragraph may permanently stain clothing or carpets.

It is also disheartening that SNP figures do not speak out to condemn such distortion of the truth, when they know full well the values and the standards of the Sunday Herald. By maintaining their silence, they are allowing lies to poison the body politic. Staff in this paper have had many conversations with many senior elected figures in the SNP who are as disgusted by the conspiracy theories of the Yes fringe as any right thinking person would be – so we would ask them: when you see your supporters lying and bullying, have the courage to stand up and call them out; failing to do so betrays any claims by the party that it stands up for what is right and fair and decent.

See how that first sentence turns the accusation of distorting the truth back on those who are levelling that charge against the Sunday Herald. See how Mackay assumes authority to speak on behalf of “SNP figures”. See how he makes the SNP guilty by default. See the way the entire independence movement is reduced to a “Yes fringe”. See how he claims the moral high ground of “right thinking people”. See how everybody who dares complain about the very thing he’s doing in this passage are collectively condemned for “lying and bullying”. See how whatever he does is lauded as “right and fair and decent”.

There was a time when journalists could get away with this kind of manipulation. But people are daily growing more aware of trickery which, in any case, isn’t nearly as subtle and clever as the likes of Neil Mackay suppose. Among a more aware and astute readership, such clumsy, clunking rhetoric is likely to have an effect quite opposite to that which is intended.

If it wasn’t already clear just how woefully Neil Mackay has misread the situation, there’s the following,

There seems to be a hatred of journalism – of questioning, of analysis, of nuance, of open debate – at the heart of such sentiment which is truly not good for democracy.

For a start, Neil, it’s not “hatred”. Labelling it as such is just an inept attempt to diminish criticism by portraying it as overly emotive. It’s not hatred. It’s anger. Anger at the media’s failure to adequately serve democracy by providing the questioning, analysis and nuance which contributes to open debate and informed electoral choices.

You don’t tell us, Neil! We tell you! And you really should have listened.