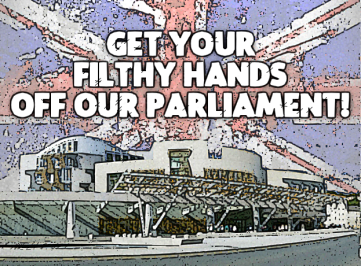 If the independence movement was looking for a new slogan, we could hardly want for anything more timely and apt than IT’S SCOTLAND’S PARLIAMENT! It would be difficult to think of a form of words which better encapsulates the essence of our campaign. Few phrases could more accurately and effectively sum up our purpose. Those three words reflect a growing mood of indignation and anger in Scotland. That the British political elite appear dumbly oblivious to this mood is yet one more measure of their contempt for Scotland’s distinctive political culture and the democratic institutions which sustain it.

It is interesting, also, to note the difference between this phrase and the language used by the independence campaign in the past. In the 1970s the slogan was IT’S SCOTLAND’S OIL! Then, the debate centred on our nation’s resources. The change to IT’S SCOTLAND’S PARLIAMENT! illustrates a move away from the shifting terrain of economic argument to the infinitely more satisfying and relevant ground of constitutional assertion.

The Scottish Parliament belongs to the people of Scotland. And it is in jeopardy.

Holyrood is the locus of Scottish politics. It is where our national politics happens. It is the place that Scottish people look to for political leadership. Whatever the issue, it is increasingly the expectation that it is the Scottish Parliament that will deal with it. But it wasn’t meant to be this way. It was never intended that Holyrood would be a real national parliament. It was only ever meant to be a ‘pretendy wee parliament’. A ‘glorified parish council’. It was certainly never envisaged that Holyrood might supplant Westminster as Scotland’s principal democratic institution. But that is what has happened.

The origins of this can be traced to the moment in 2007 when Alex Salmond made what will surely come to be recognised as one of those announcements which signal a significant change in the course of a nation’s history. The then First Minister in Scotland’s first SNP administration declared that the deliberately demeaning term ‘Scottish Executive’ was to be abolished. Henceforth, it was to be the Scottish Government.

This apparently trivial change was truly transformative. From that moment, Scotland had a real Government as well as a real Parliament. That small change triggered the process by which perceptions of Scotland’s politics and democratic institutions were dramatically altered.

There was more to it than than simply changing the name, of course. The SNP administration had to act like a real Government of a real nation. The First Minister had to behave like the real political leader of a real nation. This they did. Subsequent SNP administrations reinforced the impression of being a real Government. It may reasonably be argued that Alex Salmond’s successor, Nicola Sturgeon, has Actually surpassed her mentor in terms of the extent to which she is regarded as a significant and respected figure on the world stage, as well as being Scotland’s undoubted political leader.

Scotland now has it’s own political culture; its own democratic institutions and processes; it’s own Government, and it’s own Parliament. And the British establishment does not like this. They do not like it at all. And the intend to do something about what they perceive as a serious threat to their “precious, precious Union”.

Scotland’s political distinctiveness is seen as a challenge and an obstacle to the ‘One Nation’ project which is the rotten core of British Nationalist ideology. The eradication of this distinctiveness is, for British Nationalists, an imperative. The Scottish Parliament is the beating heart of Scotland’s democracy. For the ‘One Nation’ project to succeed, that heart must be stilled.

On Friday 23 March there will be a demonstration at Holyrood. In a symbolic gesture, a ring of people will form around the building which houses Scotland’s Parliament. It is a gesture of defiance against the forces which are seeking to undermine our Parliament, diminish our Government, eradicate our political culture, expose our public services to the ravages of corporate hyenas and, ultimately, erase the very idea of Scotland as a nation.

7 thoughts on “It’s Our Parliament!”