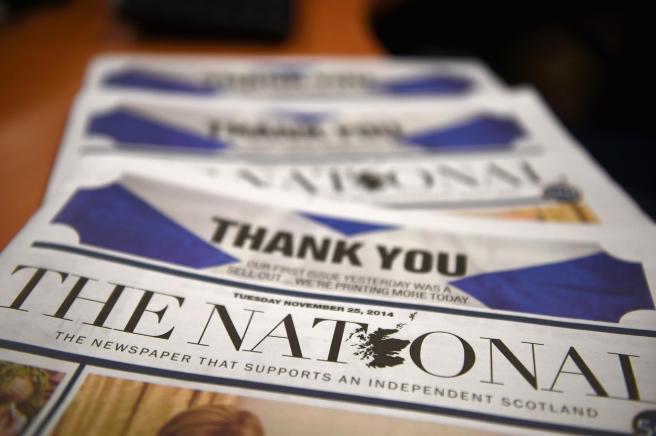 There is an increasing sense that The National is, not just the only newspaper in Scotland to reflect that half of the population which aspires to independence, but also that it is the only part of the media which is actively engaging with Scotland’s politics.

I have long maintained that The National’s real value lay, not in its support for independence, but in the way it demonstrates that a different perspective is possible. There is an alternative to the cosy consensus of the British establishment media. The National has proved that. The National provides it.

The launch of YES DIY is a further step in this process. With its Roadshow events, The National has already established a reputation for reaching out to the public in a manner and to an extent which is, I think, unique in our time. The paper has also gone further than most to allow access to its pages. It devotes an exceptional amount of space to readers letters and comments reprinted from its website. There is already a ‘what’s On’ feature for Yes  events in the print version as well as a very useful online calendar that can be used to create personalised reminders of upcoming events.

This remarkable two-way engagement is now to be enhanced with a twice-weekly feature about Yes groups throughout Scotland. And that is a damned fine thing!

One of the things that inevitably comes up in every discussion of independence campaign strategy is the problem of media access. Well, here it is! Not everything we might wish for. But wishes rarely come true. Not in the way we hope. It’s a start. It’s a foot in the door. The National is a small wedge inserted in a tiny crack in the British establishment’s media armour. It is up to us to drive that wedge home. It is we who must open up that crack until the armour is broken.

I hear criticism of The Nation. Most of it ill-informed. Much of it petty and prejudiced. All of this criticism misses the point that, whatever the paper’s provenance, it is what we make it. Some say The National was only launched to cash in on the demand for a pro-independence newspaper. Well, duh! If the Yes movement has the power to bring about the launch of a new newspaper in a time when the traditional print media is in serious decline, then it has the power to shape that newspaper. Especially when Callum Baird and his team are so evidently amenable.

The National is by no means safe. We cannot afford to take it for granted. There are a lot of very influential people who would like to see it fail. If we make it viable, we make it more secure. If we make it profitable, we effectively own it. It seems obvious to me that the entire Yes movement must get behind The National. Why would we not? Why would we decline this opportunity? That would be madness.

But it’s not only the Yes movement that stands to gain from making The National a success. The National should be respected by all who value media diversity. It should be embraced for the contribution it makes to creating media which serve society and democracy rather than established power and corporate interests.

Buy it! Read it! Share it! Promote it! Make The National work for the Yes movement, for Scotland and for democracy.