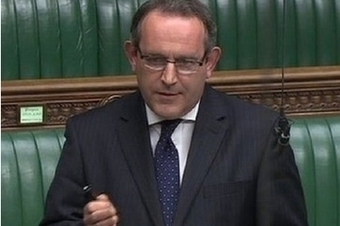 THE SNP leadership has for the first time acknowledged that it could form a new UK Coalition with Labour in a bid to keep the Tories out of power, should the electoral arithmetic present the opportunity after next May’s General Election.

Peter A Bell‘s insight:
Another misleading headline in the British media. Quite intentionally misleading, no doubt. Read the actual comments from Stewart Hosie and there is no suggestion of a formal coalition with British Labour.

Michael Settle has latched onto the phrase “through whatever mechanism” and applied a large dose of his own imagination to make it mean far more than was actually said.

Other than that, Settle relies on a distorted interpretation of Hosie’s comments on the duplicity and hypocrisy of British nationalists. The whole article is no more than a bit of rather clumsy political mischief-making.

Thus far, the British nationalist/anti-SNP propaganda is taking two lines – one idiotic and dull, the other idiotic and mildly interesting. It will come as no surprise to anybody that the dull idiocy comes to us courtesy of British Labour in Scotland with the tragically inane Maggie Curran and others trying desperately trying to convince people that the SNP is going to prop up a Tory UK Government. As anybody with the slightest awareness of Scotland’s politics will know, there is more chance of Alex Salmond being offered, and accepting, a seat in the House of Lords. In other words, no chance whatever.

The other propaganda line is almost as idiotic. And only interesting for the complexity of the duplicity and hypocrisy involved. Basically, it involves whipping up anti-Scottish resentment by peddling the notion of Scottish MP’s “dictating” what government people in England get.

We note, in passing, that British nationalists have never regarded it as in the slightest bit problematic that the government Scotland gets is invariably “dictated” by voters in England. But that may be the least of the hypocrisy involved.

The “reasoning” involved here is convoluted and contorted, so please bear with me as we venture into the mind of the British nationalist. This is kind of how it goes…

Scotland must remain part of the UK and accept the political system and electoral processes that this implies even where these are held by the people of Scotland to be wholly unsatisfactory. This holds right up to the point where Scottish MPs (as opposed to British MPs from constituencies in Scotland) gain significant power by virtue of the political system and electoral process we are told they must accept.

At this point, we are told that, while the political system and electoral processes are still the absolute epitome of democracy in action (because they’re “British”), the outcome that this “ideal” arrangement has produced is totally unacceptable. Measures must be taken to rectify this “anomaly”.

In “One Nation Britain” there must be two classes of MP. All MPs are equal so long as they are British/English. Scottish MPs must always be subordinate. Scotland must continue to send its elected representatives to Westminster. But if they are “the wrong sort”, they must be subject to limitations and constraints that would be unthinkable if imposed on British/English MPs.

Apparently, this is a “price worth paying” for the privilege of remaining part of a political union in which the people of Scotland are considered unworthy of representation on the same basis as people in England.

What is truly interesting about all of this is that the British parties appear to have resigned themselves to the fact that Scottish MPs (not tame British Labour ones) will hold the balance of power at Westminster after May 2015. They have pretty much given up on winning against the SNP within the rules that they demand Scotland complies with. They have resigned themselves to the fact that they are going to have to resort to “extra-democratic” means to prevent democracy taking a course that they dislike.